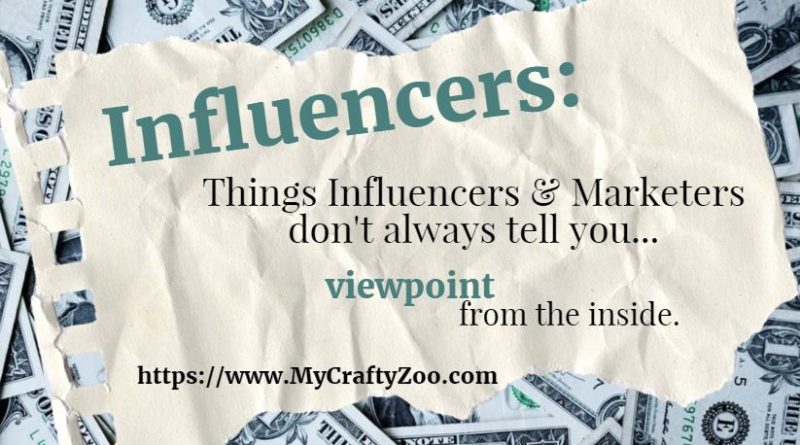 It’s funny how the word influencer has come about. Remembering a time when an ‘influencer’ was simply those people one looked up to in their group, family or community and, of course, the people that made the commercials and television shows. Although I will point out as I’m staring at the dreaded misspelled word underline that it isn’t quite recognized as a word yet… *sigh* Those underlines make me crazy as there’s a bit of a grammar freak in me…

Please note, on the topic of influencers… This is a paid post, meaning I was paid to write it. Opinions always my own. You’ll read more on that below… 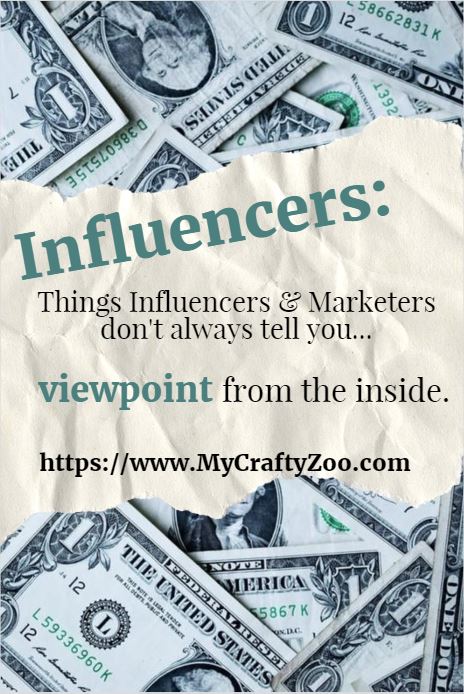 Influencers are everywhere. Since we’re talking specifically online, I’ll stick to that particular area. Influencers can be anyone these days. Whether one has a blog like this one or just a particular social media ‘spot.’ Anyone can be an influencer online. There are even children that have a good bit of influence from their reviews to their peers (which I think is adorable).

You can even read about the influencers in member spotlights such as the one linked. For whatever reason, I enjoy those. ha! Here’s a list of 200 Art Influencers to Know. Did I mention there were influencers everywhere???

The internet has definitely changed the scope of reviews. Gone are the days where we can’t find people that know about something, there are reviews available everywhere. Almost every single commercial website has reviews. Name a ‘shopping’ platform and it’s got reviews. Even if it doesn’t, you can find reviews of the shopping platform.

The problem with the abundance is knowing who to trust. Not that we knew we could trust the commercials or celebrity endorsements long before the internet. Amazon tries to eliminate reviews that seem like they are influenced by anything other than genuine feelings about the product. I’m not certain that anyone else does. I do know for a fact that those reviews on Amazon are not always caught. Personally, I hold membership to at least 3 networks where marketers will pay to have a review done specifically on Amazon. Prior to their banning sponsored reviews, I had done some. Always with the required disclosure which, funny enough, got me banned from ever doing any reviews again there when they changed their policy. Here’s a toast to honesty.

There are also ‘influencers’ who aren’t real influencers. What I mean by that is they write as if they are living the life, are a self promoted site but are actually written and posted by marketing teams in companies. While I won’t name the particular company, I know of one for a fact (a big one) who writes their own blog but not one of the employees actually use the product(s) they are ‘reviewing’. That drives me crazy and leads me be a little picky about who I listen to.

Speaking of honesty, there is a price. Frequently I tell everyone that you can’t buy my opinion. It’s not for sale. I’m far too opinionated to just say what other people want me to say. Unfortunately, that comes at a cost. I’ve lost clients because I refused to not give my honest opinion when I didn’t like something or found a flaw in a product.

I’ve been asked to not post articles that I worked for hours to write and prepare. I post them anyway. Not because I don’t care about my clients, but because I care about my readers and my reputation. I don’t know if anyone ever has or will buy something due to my review, but I will not have them do so and find out my review was ‘filled with lies’ as we say around here.

My morals and ethics are worth more than money to me, which may be why I will never make the big bucks but that’s okay.

Well, that one is a personal choice. My tendency is to follow sites for a long time until I start feeling like I can trust them. If they are similar to myself in making the occasional real honest opinion known, I’m more likely to trust them. If they are a celebrity, they get no trust from me. I’m also not a fan of blogs written by product sites, they clearly have to have a bias whether they confess it or not. Of course, this is all my silly little opinion…

There are many legit, honest influencers out there. My recommendation is to follow bloggers, lots of them. Find bloggers that you can identify with and begin to trust. Chat with them on social media, get to know them some. You’ll find the ones that you know deep down are ‘real’ when you engage.

What are your thoughts on Influencers?

Perfect Gift for a Fisherman!

6 thoughts on “Influencers: Viewpoint From the Inside”