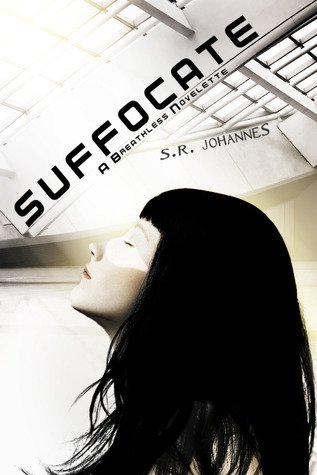 Suffocate is the first novelette in THE BREATHLESS series. It is a 15,000 word young adult thriller that combines the dystopic and science fiction genres.

For centuries, the world outside the Biome has been unlivable. Today, marks the first time anyone will attempt to leave the suffocating ecosphere. Eria is not worried because her scientist father has successfully tested the new Bio-Suit many times.

It’s a celebratory day until something goes horribly wrong. In the midst of tragedy, Eria uncovers a deep conspiracy in her perfect bubble. If those responsible find out what she knows, they won’t stop hunting her until she takes her last breath.

When Eria escapes her home in the Biome, she uncovers more about her
features and specifications as a HumaNot. Following her father’s
instructions, Eria embarks on a journey into a dangerous and unpredictable world.

Along the way, she encounters a young rebel, Dirk, who explains he’s from the Anarchy, an underground human resistance rising up against the BOTs–advanced man-made robots gone wild. Together, Dirk and Eria battle underground serpents, desert dingos, sand storms, and advanced Bots that are always hot on their trail. As they become closer, Dirk reveals his hatred of machines, forcing Eria to hide the secret of what and who she really is.

When the truth of her identity comes out, Eria is forced to become the very thing she hates the most.

S.R. Johannes is the award-winning author of the Amazon bestselling thriller series, The Nature of Grace (Untraceable and Uncontrollable). Unstoppable (book 3) is scheduled for September 2013.

S.R. Johannes is the YA advisor of ALLi and a winner of the 2012 IndieReader Discovery Awards (Young Adult category) as well as a Silver medalist (2nd place) in the IPPY awards for YA Fiction. She was also nominated for 2012 Georgia Author of the Year (Young Adult category), a Finalist in The Kindle Book Review’s Best Young Adult of 2012, and a YA Finalist in the US Book News Best Book of 2012.
After earning an MBA and working in corporate America doing marketing for over 15 years, S.R. Johannes traded in her expensive suits, high heels, and corporate lingo for a family, flip-flops, and her love of writing. She lives in Atlanta, Georgia with her dog, English-accented husband, and the huge imaginations of their little prince and princess, which she hopes- someday- will change the world.
Website | Twitter | Facebook | Goodreads | Pinterest | Newsletter | Bilan Inc

A Wicked Kind Of Dark

Life is Too Short Tour