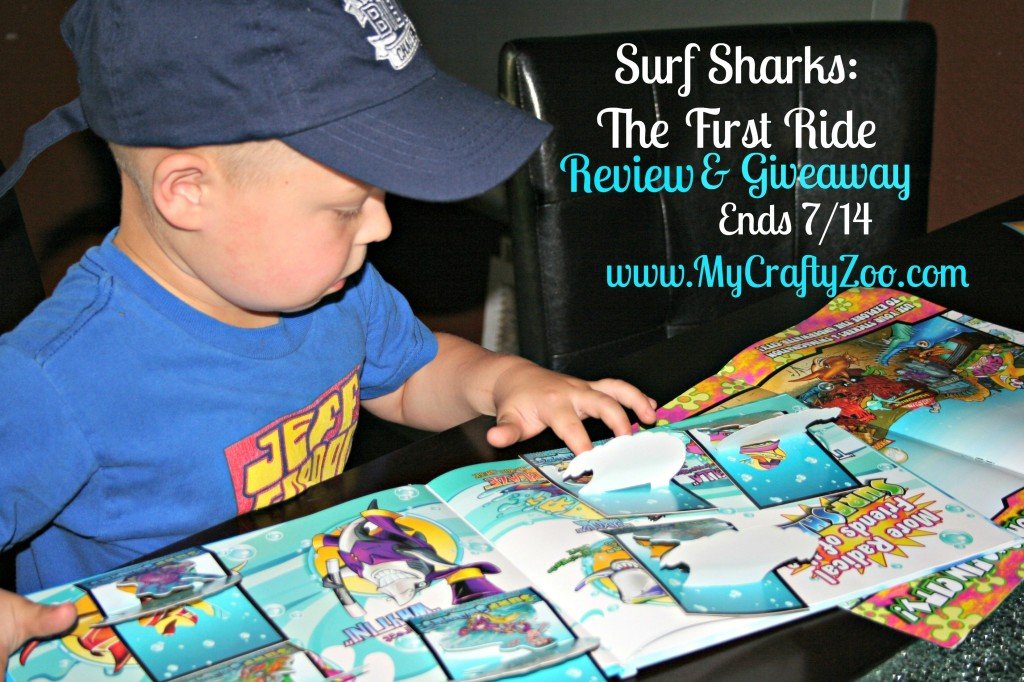 Riding the waves has never seemed like such an adventure as this!  In an exciting and adorable story that kept not only my attention but my nephews as well, Surf Sharks: The First Ride is a gnarly set of fun!!!  It introduces three young sharks and three young surfers telling a story of heroism, teamwork and, of course, adventure.  This story is definitely one to be read with excitement and playfulness.  It kept his attention though and given that he is five, that’s pretty great!  LOL.  The First Ride is the beginning of what I think will be a promising series for boys and girls alike.

After we read the story, Surf Sharks were the talk of the day.  Imagine, riding a SHARK!  What fun!  My nephew declared he wanted a shark.  LOL.  Along with the book we got a fun little gift package with pop up cards, stickers and a sticker book!  That was loads of fun too!  Making the pop ups surf across the table helped us create our own adventure! 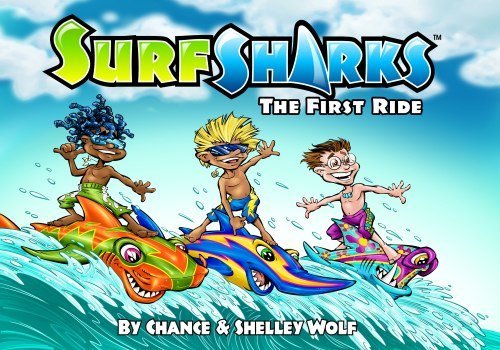 PASCO, WA (April 4, 2014) – There’s a new kids action-comedy entertainment brand on the scene, all from the imagination of Chance Wolf, an industry-recognized comic book artist and toy designer.

Fully created and illustrated by Wolf, Surf Sharks follows the comedy adventures of a group of young surfers and sharks who forge a friendship and ride the waves together as they help each other solve daily challenges faced by all growing kids.

First book in the series, Surf Sharks: The First Ride is now available in all major book stores and online via Amazon Kindle and iTunes/iBooks in eBook version.  The debut book introduces the surfing sharks – MAVRIK, TALON and HEMI along with their surfer dude friends, RIP, OZZY and WADE as they find that by working together, they can take on even the biggest problems.

Chance brings over 30 years experience as a commercial artist with high-profile credits in comic books that encompass Teenage Mutant Ninja Turtles, Spawn and Shadowhawk.  He also received an Emmy Certificate for his work as a main character designer for the Emmy Award Winning HBO animated series SPAWN and worked in product design for McFarlane Toys’ bestselling X-Files collectibles line.

With the tremendous popularity surrounding Sharks, Surf Sharks is a natural for today’s kids.  In fact, Google Trends reports that sharks now holds the #1 spot for animal search terms, not to mention the major success of such shark-themed films and television programming as Sharknado and Mega Shark vs. Giant Octopus and Discovery’s ubiquitous Shark Weeks.

Born in 1963 and raised in Eastern Washington, Chance showed a passion for art from the time he could hold a pencil.  As a child, he devoted much of his time nose-deep into comic books admiring the art and mimicking it the best he could on any piece of paper available (including his homework).  Selling his first piece of art at age 11 was a clear indicator of a prospering career as an Illustrator that has now spanned over three decades.

As a young adult, his desire to grow as an artist motivated him to focus on his drawing skills as he hit the drawing board to hone his childhood comic book passion.  His path towards becoming a professional comic book artist began when his talents were discovered by an associate of iconic industry creative Todd McFarlane.  Chance began a tenure with McFarlane that would span over ten years, allowing the new artist to work on internationally recognized comic book titles such as Shadowhawk, Spawn and Teenage Mutant Ninja Turtles just to name a few.

Chance worked side by side with Todd, assisting in drawing the number one selling comic book Spawn and was called upon to join with a team of artists to handle the task of Main Character Designers for the HBO Emmy Award winning Animated Series Spawn, in which Chance received and Emmy Certificate acknowledging his work on the series.  Chance became Todd’s right hand man on numerous assignments, including toy action figure art direction, designs for licensees and convention booth creation.  Chance was hand-picked by Todd to visit with X-Files creator Chris Carter in Hollywood in order to help finalize designs for McFarlane’s popular X-Files toy line.

Observing his son’s fascination with sharks, Chance was inspired to create Surf Sharks, which he has launched as a book series, with the first release Surf Sharks: The First Ride now available in all leading book stores in hard cover and online as an eBook via Amazon Kindle and iTunes/iBooks.

One winner will get a Surf Sharks Gift Pack.

21 Uses for Sandalwood Oil with #NewYorkBiology