Tamarindo is a traditional Mexican drink made from, you guessed it, tamarind! It’s fabulous and even better when it’s made from scratch! Try it today!

So, we love Mexican food at the Zoo, but Chief Zoo Keeper is not a huge fan as we tend to want it constantly.  He does, however, LOVE tamarindo!!!  Typically, he only gets it at Mexican Eateries as he likes it fresh, but not pre-made.

In an effort to appease him so we could have Mexican food again (probably for the 15th time of the month!), I decided to learn to make it!!!  I found a recipe on foodnetwork.com that used tamarind paste, but couldn’t find any at the stores.

I went to the local Mexican store in town and the lovely gentleman told me how to make it traditionally!  YAY!!!  It was great AND the Chief didn’t complain about having Mexican food that night!!!  Bonus for me!!!

While you can pair it with any Mexican or Spanish dish, I definitely recommend making Taquitos with them! That way, the hard work can be reserved for the Tamarindos. Definitely want to make it ahead of time so that it has time to chill and for the flavors to reach their best potential.

Tamarindo:  Per Wikipedia’s Description
Agua de tamarindo is an agua fresca drink from Mexican cuisine. It is made with tamarind after it has been boiled in water, has had its seeds removed, and has been liquified and combined with sugar. (If your mixture comes out too acidic you may need to dilute it more with water or use less Tamarindo.)

It is typically sold at taquerías and typical cuisine restaurants in Mexico. It has gained popularity in other Latin American countries, as well as in Mexican populations in the United States and elsewhere. Tamarindo is also sold as a flavor of soda, the first of which was produced by the company Jarritos.

Forgive the pictures as they aren’t all that appealing, but the flavor is awesome!!!  Hope you enjoy!!!

How to Make Tamarindo

1. Start with 1 lb of tamarind.  (Sorry I forgot to take some of the pics!!!)  Take the shell off of them.  Be patient, this takes a little while!!!
2.  Next boil the tamarind in a gallon of water.  You’ll know when it’s done as it will sink to the bottom.

4.  Take the seeds out of the tamarinds.  It’s really soft so you just use your hands, just remember it is super messy!!!  Dispose of the seeds and hard parts in the trash as your garbage disposal gets a little angry if you try to put them in!!!

5. Run the pulp through your blender, if you like pulp in your drinks.  It won’t take all of the pulp, just use as much as you like!!!

6.  Add 1 1/2 cups of sugar and fill the rest of the pitcher with water, it won’t take much.  Serve over ice or chill and serve without!!!

**If it’s not sweet enough, you can add more sugar!!!  If it’s too acidic, add water and use less tamarind next time!!! 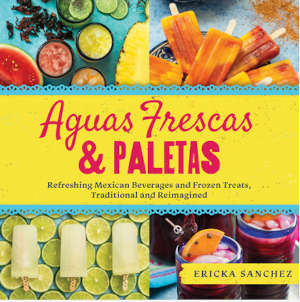 While the above recipe did not come from this book, it is absolutely fitting! If you are interested in Tamarindo, you’ll love all of these. I’m not particularly a fan of drinking Tamarindo, but Chief Zoo Keeper and Monkey said it was delicious so it must have been. They will absolutely tell me if something tastes off in the least little way.

As Aguas Frescas & Paletas, written by Ericka Sanchez, is a recipe book full of Mexican beverages and frozen treats, both traditional and re-imagined. I’m absolutely stoked to be trying these out as they look and sound delicious! Most of the recipes are simple and inexpensive to make, which are always bonuses!

The back cover discuses how summer in Mexico would never be complete without aguas frescas and paletas, freshly made drinks and popsicles in all sorts of flowery and fruity flavors. While some are way out of my comfort zone (like Hibiscus and Spiced Orange, there are many that both sound an look absolutely delicious! The book also says that the recipes in the book uses less sugar than traditional Mexican treats, which is great for our health and waistline! 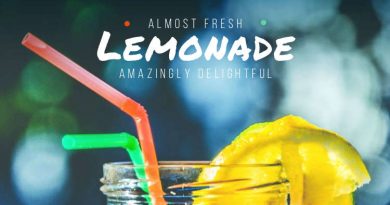